Diana death photo in Cannes doc - When will she rest in peace???

CANNES -- An unseen and unwanted British documentary is generating a firestorm before it comes to Cannes on Friday, mostly because it reportedly showcases a grisly photo of Princess Diana inside the vehicle in the Paris car crash that claimed her life on Aug. 31, 1997.
But the real controversy that should be raging is what actor-filmmaker Keith Allen presents as near-fact in Unlawful Killing: That the British establishment, including the Royal Family, arranged her murder.
Also controversial is the way Allen's team is exploiting Cannes. People are assuming the doc is in an official film festival program. It is not. Instead, Allen & company are screening Unlawful Killing in the Cannes Marche, an unregulated marketplace where anyone can show anything, short of hardcore porn, if they buy time in a Cannes theatre. Audiences are allowed in by invitation.
Marketplace screenings are normally set up to help sell movies to distributors. In this case, Allen's goal seems to be to generate publicity, most of it negative so far. Allen is a well-known British comedian and actor. He played the Sheriff of Nottingham in the recent BBC series Robin Hood.
But he also spent the past three years sorting through evidence from the inquest into Diana's death and doing interviews. His film title comes from the ruling in that inquest, a British legal result that establishes that persons unknown are criminally responsible for a death.
Watching the lurid trailer and excerpts online will quickly convince viewers that Allen is pinning the blame on the Royals, their aristocratic circle and operatives in the British secret service. "Presidents have been killed for less," the narrator says after commentators establish how Diana was "trouble" for the Royal Family.
British journalist and novelist Noel Botham, who wrote a book called The Murder of Princess Diana, says it again in the film. "There can be no doubt she was actually murdered," he says. British broadcaster Piers Morgan is also featured, spinning accusations about British spies. "We've all been to James Bond movies, thanks," he says sarcastically. "We know the secret services do a lot of dark stuff."
http://jam.canoe.ca/Movies/2011/05/10/18128266.html 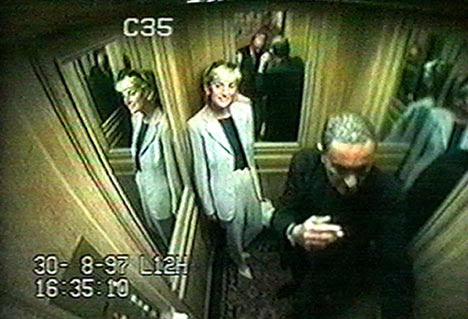 Posted by mygreekspirit at 3:33 PM