First of all, the reference to Cirque—which Latourelle helped found but which he left in 1990 to go out on his own—immediately brings to mind seating in the round. But the Cavalia stage is a 160-foot-wide, sandy-floored horizontal stage, about the breadth of an NFL football field, with the audience set on stadium seating in front of it. The tent seats 2,000 people.
An unseen track loops around the back of the stage in a circle, allowing the quarter horses in one act build up to full steam when they race in front of the audience. Did we mention people are doing handstands on them when they do?
There is also more digital imagery than a Cirque show would use, all projected on a giant back screen. The show opens with a scene of a mare birthing a colt, and the screens are used throughout to conjure horses through history and create atmospheric settings.
The show itself is made up of vignettes that display the huge breadth of equestrian acts out there. Riders trained in the Haute Ecole pull off formal little patterns, but there are even lasso acts and cowboy tricks, as well as some dressage, and a freer form of training called "Liberty", where the horses run free onstage without reigns or harnesses.
Latourelle told the Straight it would normally be unheard of to watch all these different forms, which come from such separate worlds, to share a stage. At its height, Cavalia has 19 of its 50-plus horses moving about the stage.
Add to this mix live music and a team of acrobats who do everything from balancing acts to trampoline tricks to bouncing on and off the horses on bungees that hang from the ceiling.
http://www.straight.com/article-378995/vancouver/cavalia-demystified-sneak-peak-how-show-blends-horses-and-acrobatics
http://www.cavalia.net/ 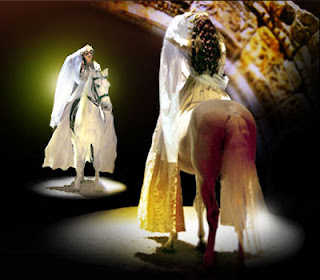 Posted by mygreekspirit at 8:00 PM No comments: Links to this post

Uranus in Aries is the period for asserting the self, its needs and wants. It is a time for breaking away from dependence and finding one's own strength for self-reliance and self-motivation. I am independent. I am strong. I am significant. I matter. I can do it. I can make it happen. I can get it started. I can because I am. This is a time for discovering or re-discovering and connecting or re-connecting with the self and its raw, passionate, instinctive drives to be the main motivator in formulating goals and getting them accomplished. Remember that Uranus governs the unexpected so, be flexible enough to expect the unexpected -- find opportunities in the least likely places or connections; formulate unique solutions to common or existing problems; tweak an old method and make it more effective; break away from boundaries and think outside the box.

http://www.cosmicchronicle.com/2011/02/surfs-up-trouble-in-oceans-above-and.html
Six Planets in Aries
The sign of Aries certainly is related to attacks and therefore it is with more than a little trepidation that we cycle watchers are anticipating the build up of 6 planets in Aries at the end of March beginning of April and this aforementioned shift of Neptune. Neptune relates to waves and oceans - the physical seas and the sea of ether around us. Where exactly are these 'attacks' likely to arise from? Natural ones from up above in the celestial sphere or man made ones down here - or both?
As of the writing of this post, we remain under the challenging alignment between Jupiter in Aries and Pluto in Capricorn which finally culminated on February 25th and full impact may not actually be realized for several more months, maybe years. Jupiter gives the optimism to push for ideals/aspirations; Aries gives the courage and strength to push fast and hard; Pluto purges and focuses on putting an end to what no longer serves; Capricorn represents the status quo. Domestic and global current events reflect the unrest of this Jupiter-Pluto square. Expect the unexpected globally and in our own personal world as Uranus' revolutionary energy gets mixed into the current celestial climate.

Uranus' transit in Aries brings another rare but long lasting planetary alignment - Uranus square Pluto. Their alignment will perfect on occasions - 2x each in 2012, 2013 & 2014, and once in 2015. A square is the most difficult and challenging relationship between two or more planets. It is an impatient energy that requires action. A square is conflict, war between two celestial bodies. There is a need to create something birthed from inside us and to manifest that creation out into the world -- may it be in your own personal world, your immediate environment or something that influences many.

Japan Earthquake Person Finder - Prayers go out to all the victims of the Japan earthquake and Tsunami March 11. 2011

http://www.google.com/crisisresponse/japanquake2011.html
http://i.dailymail.co.uk/i/pix/2011/03/11/article-1365225-0D922321000005DC-841_634x792.jpg
The powerful tsunami that today slammed into Japan's eastern coast comes just two days after warnings that the movement of the moon could trigger unpredictable events on Earth.
Astrologers predicted that on March 19 - a week tomorrow - the so-called 'supermoon' will be closer to Earth than at any time since 1992, just 221,567 miles away, and that its gravitational pull will bring chaos to Earth.
Others on the Internet have predicted it will cause further catastrophes such as volcanic eruptions and earthquakes. 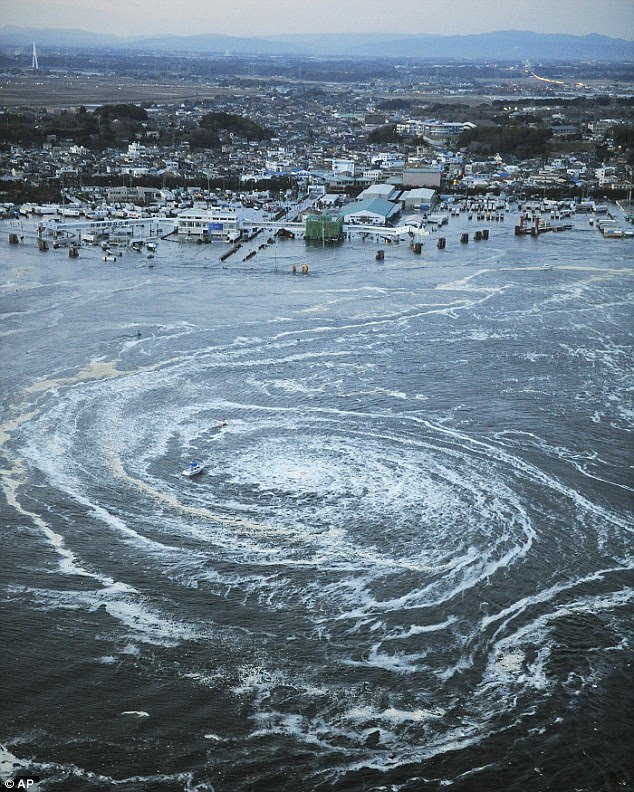 A massive 8.8 magnitude earthquake hit the Pacific Ocean nearby Northeastern Japan at around 2:46pm on March 11 (JST) causing damage with blackouts, fire and tsunami. On this page we are providing the information regarding the disaster and damage with realtime updates.
The large earthquake triggered a tsunami warning for countries all around the Pacific ocean.


Earthquakes are common in Japan, one of the world's most seismically active areas.
The country accounts for about 20 per cent of the world's earthquakes of magnitude 6 or greater.
Several continental and oceanic plates - the Pacific Plate, Philippine Plate, Eurasian Plate and North American Plate - meet in the Japan area, which is why there are so many volcanoes and hot springs across the nation.
Located in a volcanic zone so active it is nicknamed the Pacific Ring of Fire, catastrophic earthquakes occur several times each century.
Japan has suffered an estimated 200 recorded tsunamis in its history due to earthquakes that take place below or close to the Pacific Ocean.
In October 2004, an earthquake with a magnitude of 6.8 struck the Niigata region in northern Japan, killing 65 people and injuring more than 3,000.
That was the deadliest quake since a magnitude 7.3 tremor hit the city of Kobe in 1995, killing more than 6,400.
Read more: http://www.dailymail.co.uk/sciencetech/article-1365225/Japan-earthquake-tsunami-Did-supermoon-cause-todays-natural-disaster.html#ixzz1GL0LKPz8 Posted by mygreekspirit at 3:34 PM No comments: Links to this post

Here is your antidote to worry: Choose a phrase that brings you release, relief, and empowerment, such as "Peace, be still," "The power of God is within me," or "Love is the answer." Whenever worry begins to set in, consciously and meditatively repeat your positive phrase until you return to peace. The mind is capable of paying attention to only one thought at a time. If you focus on ideas that uplift you, your mind will be unable to dwell on fearful issues. Eventually you will develop the habit of positive thinking, and the worry that once haunted you will have no reality. Begin to master the power of prayer by replacing self-defeating thoughts with visions of your brightest future.
Today I set my mind and heart on a new path. I focus my energy on love, appreciation, and my highest possibilities. Today I claim responsibility for my own success, and step forward with a new enthusiasm to manifest unprecedented good. I use my mind to create only the best, and I draw unto me all the support and resources I need for positive change. Thank you, God, for opening the door to a life filled with blessings.

Posted by mygreekspirit at 9:21 PM No comments: Links to this post

Posted by mygreekspirit at 11:53 PM No comments: Links to this post

In ancient Egypt and Greece, lavender was used as a perfume and ingredient in incense. In the Middle Ages, it was considered an aphrodisiac. (It was also believed that a sprinkling of lavender on the head of a loved one would keep that person chaste—which seems to fly in the face of its purported aphrodisiac properties!) Touted as well as a cure for lice, toothaches and headaches, lavender was considered quite the all-purpose herb. It was even thought to tame lions and tigers.
Reading through lavender lore, one is less likely to find mention of its culinary use, although it's said that Queen Elizabeth I savoured lavender conserve and a lavender tisane (a herbal infusion sweetened with honey) made from plants grown at her palace. The classic herb mixture Herbes de Provence often includes lavender, as well as rosemary, thyme and bay leaf. It's doubtful, though, that many cookbooks before the 1980s mentioned lavender as a culinary herb. But it's now found in recipes for sweet dishes, infusing them with a citrusy bite, and in savoury dishes, offering a soft hint of flavour similar to rosemary or marjoram.
http://www.canadiangardening.com/plants/perennials/a-passion-for-lavender/a/1546