Ilene Meyer - Artist of the day

Ilene Meyer is an internationally published artist who has received critical acclaim since the mid 80’s. She was born in Seattle, Washington. Inspiration for her paintings comes from travels throughout the world exploring cultures, philosophy, geography and science. Her work carries many hidden symbols such as images within images or symbols slyly depicted as something else.  Her surrealistic treatment of still life, animals, man and the universe spring from a loving perspective filled with fun and an interesting storyline. 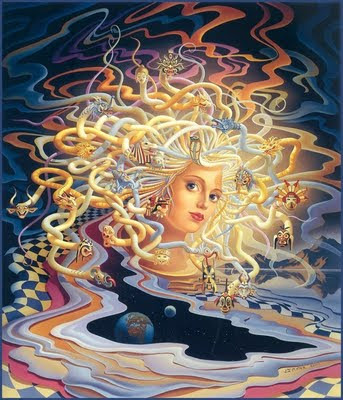 Posted by mygreekspirit at 9:58 PM No comments: Links to this post

Posted by mygreekspirit at 11:49 AM No comments: Links to this post 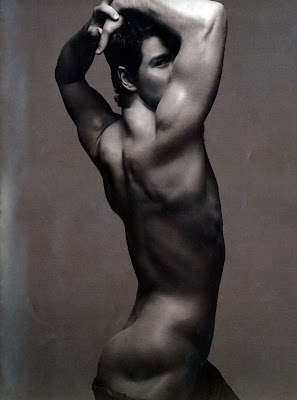 Since the beginning of his career,  Sakis Rouvas has been considered as analogous to Michael Jackson to Greece.[85] Rouvas has played a major role in the popularization of Western music genres and in the development of pop music in the Greek industry and breaking cultural barriers and being widely credited as the genres primary performer.[86] In 2006, Pavlos Zervas of MusicCorner alleged that Rouvas was the primary performer supporting the pop/dance genre in Greece with such success.[87] Jarmo Siim of the EBU characterized Rouvas as "undoubtedly the ultimate pop star in Greece with great international appeal."[88] In the early 1990s, Rouvas became a dominant figure in Greek music, gaining notoriety for having a mass fanbase, especially with youth, leading to him being recognized as a phenomenon, a first in Greek music
In addition to musical influences, Rouvas' work has been influenced by literature, Greek art, and spirituality. He has credited his success to his faith, which he associated with more as he got older, saying "I am very thankful. I feel blessed. And everyday I thank God for that. Everyday. That is something that I didn't do in the past. Once, I didn't understand, I didn't value."[83] He has a close personal relations with Ecumenical Patriarch Bartholomew I of Constantinople,[84] whom offered to baptize his first-born child.

Posted by mygreekspirit at 4:45 PM No comments: Links to this post 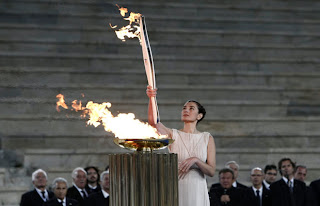 Greek actress Maria Nafpliotou, playing the role of high priestess, lights a torch during a handover ceremony at Panathenian stadium in Athens October 29,2009.

VANCOUVER - The 2010 Olympic torch relay has barely started, and already somebody has put one of the 12,000 torches being used up for sale on eBay.

It seems somewhat unpatriotic for a Canadian to turn around and sell their torch mere days after the Olympic flame reached Canada. But as it turns out, the seller probably isn’t Canadian — the torch is being sold from Athens, Greece.

The seller’s eBay name is Douramakos, and states that they have been selling Olympics memorabilia for 25 years.

“This is one of the first torches used in the torch relay in Greece,” reads the eBay listing.

“The gas canister was taken out from all torches by the organizers after each torch bearer finished their run.”

It is a fairly detailed listing — Douramakos has put up 15 photos of the torch. You can find it by searching “2010 Olympic torch” on the eBay site.

Torches are one of the most prized collectibles from the Olympics. Some are quite valuable — an Olympic torch from the 1988 Winter Olympics in Calgary is worth about $10,000 US.

The story of the Greek pioneers in British Columbia is the story of Greek sailors who, having drifted up to the Pacific coast, remained and made their homes there. Such sailors, in addition to Capiotis, his son-in-law Chugranis of Victoria B.C., are Nick Stevenson Moreas of Ladner B.C. and many others of whom unfortunately no valid record is to be found.

One of the first Greeks to settle in Vancouver was old man John Deliyannis who was not certain as to the date of his arrival there, probably it was in 1882. In his younger days he was very prominent in the candy business. He passed away at a ripe old age.

George Kanaris was the proprietor of the Vancouver Fish and Oyster Co., the oldest retail fish market in Vancouver. George Berbinos was his partner. Kanaris was very prominent in the Greek Community affairs, having made large contribution to the founding of the Greek Orthodox Church of Vancouver. He made quite a fortune in real estate and owned several houses and properties. He passed away at the age of 65.

Posted by mygreekspirit at 3:26 PM No comments: Links to this post