Fide Koksal - Turkish girl who loves Greece so much she made it her home and career. Bravo Fide !!

Posted by mygreekspirit at 3:01 PM No comments:

Guzaarish (English: Request) is an upcoming Hindi-language Indian film being directed by Sanjay Leela Bhansali and starring Hrithik Roshan and Aishwarya Rai in leading roles. The film is scheduled for release on November 19, 2010.[1]. The First Look of Guzaarish released on September 23rd, 2010.
Aishwarya Rai has previously worked with Bhansali in two films, Hum Dil De Chuke Sanam (1999) and Devdas (2002). Hrithik Roshan and Aishwarya Rai have earlier worked together in two movies together: Dhoom 2 (2006) and Jodhaa Akbar (2008). Some critics acclaimed that trailor looked like Christopher Nolan's movie, The Prestige (film) movie starring Hugh Jackman & Christian Bale while some others argued that it looked like Edward Norton starrer movie, The Illusionist (2006 film). The story is loosely based on the 1981 Hollywood movie, Whose Life Is It Anyway? (1981 film) directed by John Badham. It also resembles the Spanish movie The Sea Inside.

Posted by mygreekspirit at 1:51 PM No comments:

On Sept. 23 at 1500 UTC (11 a.m. EDT/midnight Sept. 24 local time at the Japanese Island Iwo To), Malakas had maximum sustained winds near 69 mph (4 mph under typhoon strength). It was moving north at 14 mph toward Iwo To, Japan. It was located about 170 nautical miles south of the island, near 22.6 North and 140.9 East. Malakas is kicking up 27-foot high seas as it tracks north.
We don’t know what made the scientists to give this name to the tropical storm.

The word malakas derives from the ancient Greek word "malthakos", which means "spoilt, well-used to luxuries of life".
In modern Greek, the word malakas is used metaphorically in everyday speech to define the individual that uses no common sense, who instead repeats the same mistakes many times over, while maintaining an attitude of self-righteousness.
Malakas can also be used in a variety of ways, in modern Greek, according to the circumstance and the way the word is stressed:

Posted by mygreekspirit at 8:45 PM No comments:

Posted by mygreekspirit at 8:21 PM No comments:

Posted by mygreekspirit at 8:05 PM No comments:

Autumn Equinox - A time of Reflection

The Autumn Equinox occurs on September 22nd, 2010 @ 11:09pm EDT and on September 23rd @ 3:09am UT when the Sun ingresses Libra.
The next 90 days shall be influenced by the energy tones set upon the Equinox and during this time we shall be fleshing out and further developing our creations that were seeded during the Spring Equinox 6 months prior while also weeding out that which has not come to viable form post Summer Solstice.
The  Saturn-Uranus opposition series that began in 2008 has come to conclusion and the Cardinal Squares of this past summer are now separating yet we find we are still navigating our way through the fall-out and sifting through the many pieces of our lives that were impacted by these forces that initiated us to deep and long lasting changes.  While these past months may have appeared to be a stalemate in many ways(especially if you had natal placements being influenced by these heavy-duty transits) we were nonetheless seeding and fostering the growth of new creations even as some parts of our lives continued to disintegrate around us. So much shifting was continuously occurring that most days were chaotic at best and others were just downright excruciating. Yet through this all we continued to place precious energy into our new endeavors and have held onto the hopes that at the end of this stormy period we would find within the debris that something(s) we had sowed last Spring had indeed taken root and became a viable life-form

9/3 Sun conjunct Mercury
Mars sextile Ceres
9/4 Venus trine Neptune
9/5 Venus trine Chiron
9/8 New Moon 15 Virgo, 6:30 am
Venus enters Scorpio
9/9 Jupiter enters Pisces
Mars trine Neptune
9/11 Mars trine Chiron
9/12 Venus sextile Pluto
Mercury direct
9/13 Mars quincunx Jupiter
Mars quincunx Uranus
9/14 Pluto direct
Mars enters Scorpio
9/17 Sun square Ceres
9/18 Jupiter conjunct Uranus
Mars sextile Pluto
9/21 Sun opposite Jupiter
Sun opposite Uranus
9/22 Sun enters Libra
Autumn equinox 11:10 pm
9/23 Full Moon 0 Aries 5:17 am
9/25 Sun square Pluto
9/26 Ceres sextile Chiron
9/30 Sun conjunct Saturn
Venus stationary, turns retrograde October 8
Thankfully, the intensity of this summer's planetary alignments is beginning to lessen as the planets in the early degrees of the cardinal signs begin to separate (if you're new to Skywatch you might want to read through the June, July and August issues to read more about the cardinal alignments that have inspired so much change and drama). As September begins, Saturn and Pluto are still within range of their challenging square formation, creating tension and conflict that manifests both internally and externally. But by the end of the month they will be out of range of each other and that will ease the stress considerably.
Still, Pluto is virtually at a standstill now in preparation for its change of direction later in September, so its influence is powerful throughout the month. Pluto represents the power of destruction and regeneration, forcing us to recognize anything in our life that doesn't serve our higher purpose. Pluto will be there to remind us throughout September that even though the intensity of the cardinal alignments is fading, we must still be open to surrender where necessary in order to continue to evolve. Once Pluto turns direct on September 14th we will start to see more movement in our lives.
Once again we find the elements out of balance, with a predominance of air and virtually no water (the only planet in a water element is Uranus which has retrograded back into Pisces, and because Uranus is so dry this is somewhat like negative water). Water is the element that provides us with a flow and a connection to feelings and emotions, and when water is in short supply and air predominates we have a tendency to stay "in our heads" and be cut off from the heart and the feeling nature. Of course how greatly you are affected by this will depend on how the elements balance in your own chart.
Chiron and Neptune are still within a degree of each other, and although they will not reach an exact conjunction they are certainly still involved with each other and putting continuous pressure on us to reach deep within the soul (Neptune) in order to pull out any unresolved wounds and hurts (Chiron) that will facilitate our personal evolution and help us to become fully healed beings. These two spiritual teachers bestow personal wisdom and a sense of balance that can only come from this healing process of the soul.
Lynn's Skywatch
Posted by mygreekspirit at 2:21 PM No comments:

Posted by mygreekspirit at 10:38 PM No comments:

How To Deal With Venus In Retrograde 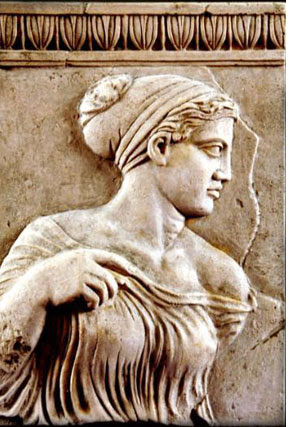 There is an ancient Roman saying: “Vocatus atque non vocatus deus aderit.” Called or not called, the god will be there.
According to astrologer Richard Idemon, the ancient Greeks had a saying that when passing by the temple of a god, you must honor the god by quickly making the appropriate sacrifice at the appropriate time. One should never offend the gods by ignoring them.
So let's draw ever nearer to archetypal Venus (known to Greeks as Aphrodite), so that we can learn how to offer up the appropriate tribute when she looks our way.
From Plato's The Phaedrus

“so does the stream of beauty, passing through the eyes which are the windows of the soul, come back to the beautiful one; there [255d] arriving and quickening the passages of the wings, watering them and inclining them to grow, and filling the soul of the beloved also with love.
And thus he loves, but he knows not what; he does not understand and cannot explain his own state; he appears to have caught the infection of blindness from another; the lover is his mirror in whom he is beholding himself, but he is not aware of this.
When he is with the lover, both cease from their pain, but when he is away then he longs as he is longed for, and has love's image, love for love lodging in his breast…” Phaedrus – Plato,  translator – Benjamin Jowett 1871

Wow! Did you catch that? Let it sink in for just a second or two...

"the lover is his mirror in whom he is beholding himself..."

According to astrologer Liz Greene, this particular passage from Plato's Phaedrus contains: "the most profound meaning of Venus – the beloved, be it person, object or intellectual idea, as the mirror of one’s own soul.” Liz Greene from The Inner Planets
http://thezodiac.com
Posted by mygreekspirit at 10:10 PM No comments: