The Salvation of Greece, different opinions

Posted by mygreekspirit at 10:08 PM No comments: Links to this post

Was Greek Almost the Official Language of the United States?

John Adams would often use Greek words in his letters to Thomas Jefferson, who admired many aspects of the Ancient Greeks. He could read and speak the language fluently.
When Alexander Hamilton entered King’s College (now Columbia University) in 1773, he was expected to already have a mastery of Greek and Latin grammar, be able to read three orations from Cicero and Virgil’s Aeneid in the original Latin, and be able to translate the first ten chapters of the Gospel of John from Greek into Latin.
When James Madison applied at the College of New Jersey (now Princeton), he was expected to be able to “write Latin prose, translate Virgil, Cicero, and the Greek gospels and [to have]a commensurate knowledge of Latin and Greek grammar.” Even before he entered, however, he had already read Vergil, Horace, Justinian, Nepos, Caesar, Tacitus, Lucretius, Eutropius, Phaedrus, Herodotus, Thucydides, and Plato.
The study of Latin and Greek, which is what the term “classical education” originally implied, was not something the American Founding Fathers learned in college, but something they were expected to know before they got there.
The founders knew these writers and quoted them prolifically. Their letters, in particular, display a wide familiarity with classical authors. The correspondence between educated men of the time was commonly sprinkled with classical quotations, usually in the original Latin or Greek. It was not only prevalent, but apparently sometimes annoying to the recipient. Jefferson used so many Greek quotes in his letters to Adams (who liked Latin better than Greek) that, on one occasion, Adams complained to him about it. http://www.pappaspost.com/the-classical-education-of-the-founding-fathers-was-greek-almost-the-official-language-of-the-united-states/
Posted by mygreekspirit at 10:02 PM No comments: Links to this post

Posted by mygreekspirit at 9:33 PM No comments: Links to this post

Greece is bleeding and my heart is breaking

Posted by mygreekspirit at 12:14 AM No comments: Links to this post

Greece doesnt deserve to have its debt cancelled 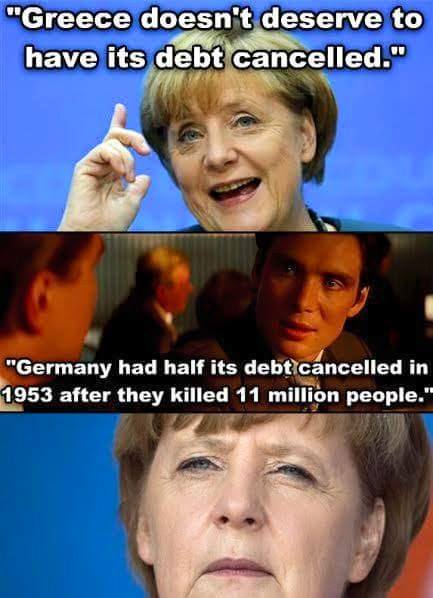 Posted by mygreekspirit at 4:39 AM No comments: Links to this post

5 things you need to know about Greece's financial meltdown

Posted by mygreekspirit at 6:05 PM No comments: Links to this post