Posted by mygreekspirit at 12:56 PM No comments: Links to this post 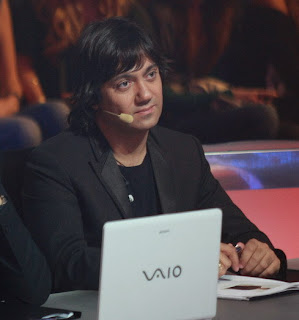 Posted by mygreekspirit at 12:22 PM No comments: Links to this post 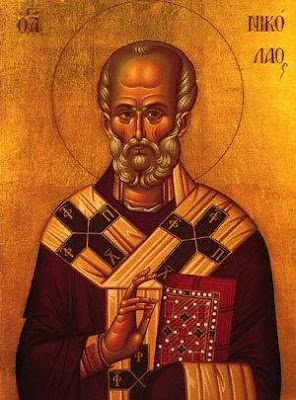 St. Nicholas is important in Greece as the patron saint of sailors. According to Greek tradition, his clothes are drenched with brine, his beard drips with seawater, and his face is covered with perspiration because he has been working hard against the waves to reach sinking ships and rescue them from the angry sea. Greek ships never leave port without some sort of St. Nicholas icon on board. To members of the Eastern Orthodox Church, as are most Greek Christians, Christmas ranks second to Easter in the roster of important holidays. Yet there are a number of unique customs associated with Christmas that are uniquely Greek. On Christmas Eve, village children travel from house to house offering good wishes and singing kalanda, the equivalent of carols. Often the songs are accompanied by small metal triangles and little clay drums. The children are frequently rewarded with sweets and dried fruits.
After 40 days of fasting, the Christmas feast is looked forward to with great anticipation by adults and children alike. Pigs are slaughtered and on almost every table are loaves of christopsomo ("Christ Bread"). This bread is made in large sweet loaves of various shapes and the crusts are engraved and decorated in some way that reflects the family's profession.
Christmas trees are not commonly used in Greece. In almost every home the main symbol of the season is a shallow wooden bowl with a piece of wire is suspended across the rim; from that hangs a sprig of basil wrapped around a wooden cross. A small amount of water is kept in the bowl to keep the basil alive and fresh. Once a day, a family member, usually the mother, dips the cross and basil into some holy water and uses it to sprinkle water in each room of the house. This ritual is believed to keep the Killantzaroi away from the house.
There are a number of beliefs connected with the Killantzaroi, which are a species of goblins or sprites who appear only during the 12-day period from Christmas to the Epiphany (January 6). These creatures are believed to emerge from the center of the earth and to slip into people's house through the chimney. More mischievous than actually evil, the Killantzaroi do things like extinguish fires, ride astride people's backs, braid horses' tails, and sour the milk. To further repel the undesirable sprites, the hearth is kept burning day and night throughout the twelve days.
Gifts are exchanged on St. Basil's Day (January 1). On this day the "renewal of waters" also takes place, a ritual in which all water jugs in the house are emptied and refilled with new "St. Basil's Water." The ceremony is often accompanied by offerings to the naiads, spirits of springs 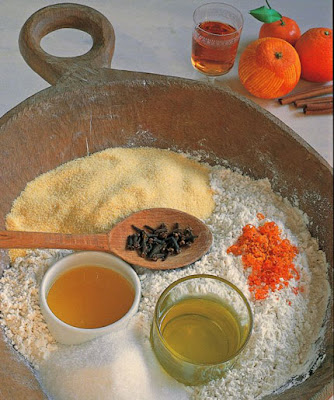 http://www.aglaiakremezi.com/articles/128/christmas-in-greece
Greek Traditional Recipes for Christmas
Posted by mygreekspirit at 11:48 AM No comments: Links to this post 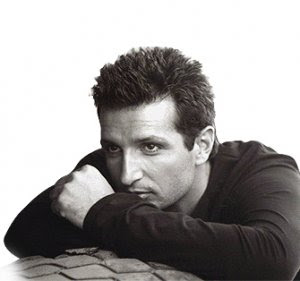 Dimitris Basis, is a Greek singer musician. He is from the village of Cherso, near the city of Kilkis.
Dimitris Mpasis was born in Stuttgart. His parents lived in Germany for some years. He came to Greece for the first time at the age of eight when his entire family returned to Herso, a small village near the Greek - Macedonian border.
At the age of nine he started chanting the liturgy in the local church and three years later he begun to study Byzantine music. He gained his diploma at the age of seventeen. At the same time he used to sing at many cultural celebrations.
When he was twenty years old just after his first steps in professional singing he was discovered by Stamatis Kraounakis and Warner Music company who immediately offered him a contract. For three continuous seasons he was singing with Alkistis Protopsalti, Stamatis Kraounakis and Lina Nikolakopoulou, and wrote history due to his musical performances under the music director Andreas Voutsinas. His professional debute began with his participation in two of Stamatis Kraounakis works: “Otan Erhonde I Fili mou” where he sang two songs and in the soundtrack of the T.V. series “To Trito Stefani” where he took part in one song. In 1996 he was discovered by Christos Nikolopoulos and he performed live. In 1997 his first album became a reality with the title “Me tin Fora tou Anemou” (music by Christos Nikolopoulos, Kostas Falkonis and lyrics by Christos Papadopoulos). Eight months later the soundtrack of T.V. series “Psithiri Kardias” was in music stores (music by Christos Nikolopoulos and lyrics by Eleni Giannatsoulia).
It was a tremendous success with over 120.000 sales. Dimitris Mpasis’ voice started to be heard not only in Greece but abroad as well. In the next season he worked with Dimitra Galani and Manolis Lidakis and by the end of 1998 his second personal album “Se Anihtous Ouranous” is ready (music by Christos Nikolopoulos and lyrics by Aris Davarakis, Eleni Giannatsoulia).
The winter period of ‘98 – ‘99 was important to Dimitris Mpasis’ career because of his collaboration with Haris Alexiou. In the summer of 1999 he started a series of concerts all over Greece and Cyprus with Yiannis Kotsiras. That same summer he performed with Stavros Xarhakos in a series of concerts with K.O.E.M. (National Orchestra of Greek Music) both in Greece and abroad. Simultaneously he took part in a dedicated concert for Christos Nikolopoulos in the Athens Concert Hall. This concert was also performed again in the Herod Atticus Odeon. In October 1999 he gave a series of concerts in Australia with Irini Haridou. In the winter of 1999 – 2000 we saw him with Eleni Tsaligopoulou. *wikipedia* 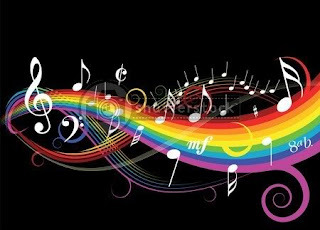 Calendar of Music Events in Greece 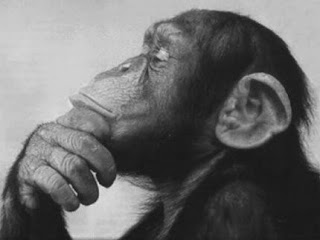 Wisdom through the ages


Posted by mygreekspirit at 11:13 AM No comments: Links to this post