Posted by mygreekspirit at 1:35 PM No comments: Links to this post

August 2012 is a month with two full moons. And, by popular acclaim, that means it’s a Blue Moon month. That’s because a Blue Moon is sometimes defined as the second full moon in a calendar month. The first full moon is August 1. The second full moon is August 31, 2012.
There are two more definitions for Blue Moon. It can be the third of four full moons in a single season. Or it can be an actual blue-colored moon.
It’s very rare that you would see a blue-colored moon, although unusual sky conditions – certain-sized particles of dust or smoke – can create them. Blue-colored moons aren’t predictable. So don’t be misled by the photo above. The sorts of moons people commonly call Blue Moons aren’t usually blue. For more about truly blue-colored moons, click here.
Now on to folklore’s Blue Moons. Every month has a full moon, and, most of the time, the names for full moons coincide with particular months or seasons of the year. By either definition, the name Blue Moon accounts for times when there happen to be more full moons than is convenient.
Blue moon as second full moon in a month. In recent decades, many people have begun using the name Blue Moon to describe the second full moon of a calendar month.
The time between one full moon and the next is close to the length of a calendar month. So the only time one month can have two full moons is when the first full moon happens in the first few days of the month. This happens every 2-3 years, so these sorts of Blue Moons come about that often.
When is the next Blue Moon, according to this first definition? August 31, 2012.
The idea of a Blue Moon as the second full moon in a month stemmed from the March 1946 issue of Sky and Telescope magazine, which contained an article called “Once in a Blue Moon” by James Hugh Pruett. Pruett was using a 1937 Maine Farmer’s Almanac, but he simplified the definition. He wrote:

Seven times in 19 years there were — and still are — 13 full moons in a year. This gives 11 months with one full moon each and one with two. This second in a month, so I interpret it, was called 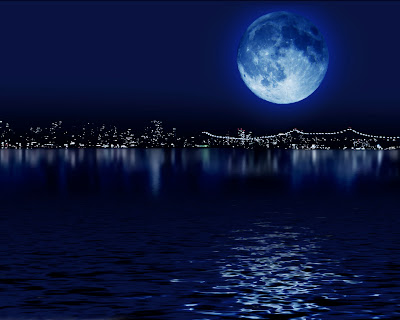 Posted by mygreekspirit at 2:40 AM No comments: Links to this post

Photos around the world

A montage of 11 pictures showing the moment a tombstoner dived 100ft off a cliff in Cornwall. The unnamed diver was pictured as he leapt from the top of the towering rock face near Penzance. He hurled himself through the air and landed in just 20ft of water below. The stunning image of his dive from the top of the cliff was captured on camera by Alastair Sopp, 25Picture: ALASTAIR SOPP / SWNS

AP Photo 1 day ago A horse wears a 'for sale' notice at the Appleby Horse Fair in Appleby in Westmorland, northern England, Friday June 8, 2012. Appleby Horse Fair has existed under the protection of a charter granted by King James II since 1685. It is one of the key gathering points for the Romany, gypsy and the traveling community. The Fair is attended by about 5,000 travelers who come to buy and sell horses which is held from Thursday to Sunday. The animals are washed and groomed before being ridden at high speed along the 'mad mile' for the viewing of potential buyers.http://www.aliraqi.org/forums/forumdisplay.php?f=70
Posted by mygreekspirit at 2:13 AM No comments: Links to this post

UNFORTUNATE SHEEP Four hundred sheep were killed by lightning in the village of Distrato, Konitsa prefecture on Wednesday. The lightning struck as a shepherd was gathering up his flock to put them in their pen in heavy rainfall during a flash thunderstorm. The shepherd was uninjured.
http://www.athensnews.gr/portal/1/57468?action=print

Posted by mygreekspirit at 1:53 AM No comments: Links to this post

Are you dating a Psychopath?

Posted by mygreekspirit at 1:44 AM No comments: Links to this post

Posted by mygreekspirit at 2:57 PM No comments: Links to this post