Posted by mygreekspirit at 2:09 PM No comments: Links to this post

Greece confirmed its participation in the Eurovision Song Contest 2011, to be held between 10 and 14 May 2011.[1] In late February 2011, as part of the selection process organized by the Greek national broadcaster Hellenic Broadcasting Corporation (ERT), six competing acts—Antigoni Psihrami, Kokkina Halia, Loukas Giorkas, Nikki Ponte, Trimitonio, and Valanto Trifonos—will perform their prospective entries live during a televised event, with the winning entry to represent Greece at the Eurovision Song Contest. The songs will be selected by a combination of public televoting and judge votes.
http://eurovision.ert.gr/

Posted by mygreekspirit at 2:00 PM No comments: Links to this post

Posted by mygreekspirit at 1:55 PM No comments: Links to this post

blogging with a smartphone who would have thought lol

My first post via my phone OPA!
Published with Blogger-droid v1.6.5
Posted by mygreekspirit at 8:29 AM No comments: Links to this post

Posted by mygreekspirit at 11:39 AM No comments: Links to this post

The full moon on 19 January 2011 at 29 degrees Cancer is trine Jupiter, sprinkling much needed luck and laughter upon us after the dramas and chaos of the Christmas holidays. Our emotions are warmed and we are feeling generous. But we are going to have to put this benefic influence to good use. For we also get some very complex aspect patterns here. Primarily a mystic rectangle which contains a Yod. The players are Jupiter opposite Juno, Sun opposite Moon, and Chiron at the Yod apex.

At the Solar Eclipse we were seeking out our soulmate. Now we have found them and realize we have met our match. Oh dear!.. Jupiter and Juno were the cosmic version of Liz Taylor and Richard Burton, with their epic fights and jealous squabbles. Juno inflicted rather harsh punishments on any nymph whom Jupiter took a fancy too, giving him hell in the process. She was no compliant wife. This is where her punitive side comes out, but she also stands for bringing about justice and a fair outcome.

Asteroid Lilith is all about fighting for equality, and it is competitive too. Interesting to see this double whammy Ceres. They were both actors so there must’ve been a certain amount of rivalry too.
Burton was used to being the ladies-man and had a certain old fashioned sensibility (Ceres) It was ok for a man to flirt around, but he couldn’t handle it when jealous Liz did the same back to him. Lilith gives as good as she gets, hence their famous drunken brawls.
His Chiron conjunct her BML. His Chiron semi-sextile her Osc Lilith.
Chiron is not just about wounding (Tho there was plenty of that verbally between them), it is also about enlightenment. I’m sure their relationship provided them plenty of opportunity for soul growth. Liz was at home being the Diva, but when her spoilt princess act got too much, Richard would slap her back to reality. Richard was used to women falling at his feet. Meeting his equal meant his usual unquestioned male supremacy was put to the test. 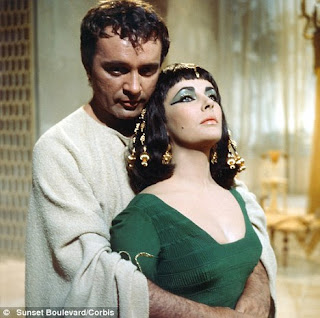 Posted by mygreekspirit at 12:37 AM No comments: Links to this post