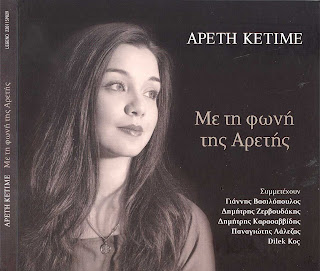 Posted by mygreekspirit at 10:20 PM No comments: Links to this post

Do you believe in God????? lololol

Guido Hatzis is a Greek-Australian comic character created by Australian comedians Tony Moclair and Julian Schiller and voiced by Moclair. Guido appeared originally in the context of Schiller and Moclair's radio program "Crud" on the Australian Radio Network Triple M. Several albums have been released in the name of Guido Hatzis, including Do Not Talk Over Me in 1999, Whatever in 2000, and Deported in 2002. Most of Hatzis's comedy involves making prank calls that are usually centred on outrageous claims about his looks and abilities, Greek stereotypes, and extreme rudeness. Moclair appropriated the last name "Hatzis" from friend and sometime producer of the "Crud" program, fellow broadcaster and actor Chris Hatzis; Chris Hatzis, Julian Schiller and Tony Moclair are alumni of the Breakfasters on Melbourne's 3RRR. Chris Hatzis based the character on fellow school friend Paul Catelaris aka "Pauly", a greek guru who migrated to Melbourne from Athens in the late 1980s. *wikipedia*
Posted by mygreekspirit at 11:31 AM No comments: Links to this post

Posted by mygreekspirit at 11:08 AM No comments: Links to this post 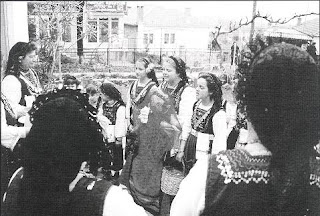 Folk rituals of Vagia
The girls of the village walk form one house to another with Vagia, the doll they make the night before and sing the songs of Vagia. They accept treats and go back home and ritually destroy the doll they made while singing eastern songs of the area.
ΚΑΛΑΝΤΑ 1927 KALANTA ΧΡΙΣΤΟΥΓΕΝΝΑ XRISTOYGENNA

Posted by mygreekspirit at 12:07 PM No comments: Links to this post

Enjoy the Mandolin, AGAIN, and AGAIN 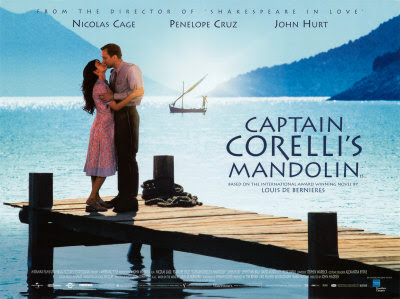 About the film Captain Corelli's Mandolin

The idyllic beauty of Greece's Mediterranean coast has been invaded by Italy, bringing legions of soldiers to the once tranquil, magical island of Kephalonia. Captain Antonio Corelli (played by Nicholas Cage),  an officer with an irrepressibly jovial personality and passion for the mandolin, initially alienates a number of the villagers, including Pelagia. The daughter of the village doctor, Pelagia (played by Penelope Cruz) is an educated and strong-willed woman, and while at first offended by the Italian soldier's behavior, she slowly warms to his certain charms as they are forced to share her father's home. When Pelagia's fiancee, a local fisherman, heads off to war, the friendship between Antonio and Pelagia grows even stronger. Her beauty and intelligence have captured his heart, and his fondness for the village's vibrant community causes him to question his reasons for fighting. Antonio becomes a part of the lives of the villagers, but the moment is fleeting. As the war grows ever closer, Antonio and Pelagia are forced to choose between their allegiance to their countries and the love they feel for one another-a love which must overcome tremendous odds, and endure the inevitable sacrifice which accompanies eternal devotion.

Movies don’t only make stars of actors; they can make great advertisements for destinations. Peter Jackson’s The Lord of the Rings trilogy had a phenomenal impact on tourism in his native New Zealand, and the Greek island of Cephallonia enjoyed a surge in visitors following the big screen adaptation of bestselling book Captain Corelli’s Mandolin.
Greece looks set to enjoy another tourist boom this summer with the release of Mamma Mia!, the ABBA musical set on a Greek island, and My Life in Ruins, the first feature film granted permission to shoot at the Parthenon. Much of My Life in Ruins was actually filmed in Alicante, Spain, where production costs are cheaper, but the Greek tourist board is hoping movie-goers won’t spot the difference.
After all, Montenegro became hip overnight after Casino Royale, even though the scenes in question were filmed in the Czech Republic.
No matter how cheesy, a movie that features ABBA’s anthems is sure to be a feel-good hit. Mamma Mia!
(released on 11 July) stars Meryl Streep as Donna Sheridan, who is forced to confront her wayward past when three ex-lovers show up for her daughter’s wedding on a Greek island. Director Phyllida Lloyd scoured the country by helicopter to find the perfect island locations, finally choosing Skopelos and Skiathos, renowned for their pristine beaches fringed by pine forests. Teenage girls descended on the islands en masse last September, hoping for a glimpse of Colin Firth or Pierce Brosnan. While most of the film’s stars stayed at the swanky Skiathos Palace Hotel overlooking sandy Koukounaries Bay, ABBA’s Benny and Björn holed up on a huge yacht to keep the paparazzi at bay. From cosmopolitan Skiathos, take a short trip by ferry or hydrofoil to sleepier Skopelos. Go for a dip at Kastani beach, where Donna’s beach bar stood. Recapture the film’s romance by climbing the steep steps to Agios Ioannis chapel, where the wedding scene was shot. The Agnanti restaurant (+30 24240 33076, agnanti-rest.gr) in nearby Glossa has been serving inventive cuisine since 1953. The cast and crew partied at the Adrina Beach Hotel taverna (+30 24240 23373, adrina.gr), where the hot dish is spaghetti with lobster. After hours, head for Platanos Jazz Bar (+30 24240 23661) in Skopelos town, where Brosnan enjoyed a beer or two. 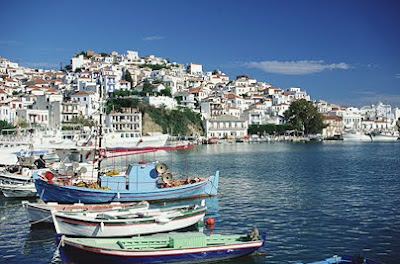 Read all about the movie
.
Posted by mygreekspirit at 12:05 PM No comments: Links to this post