Tsifteteli is the name for Greek style Bellydance. This name comes from the Turkish word Chifteteli, which originally meant "two strings".

Tsifteteli was mainly brought to Greece by the Asia Minor Greeks, who had to leave their hometowns because of a population exchange between Greece and Turkey. Greece was occupied by the Turks for about 400 years (from the early 15th century to the early 19th century) and was part of the Ottoman Empire.

The first Greek colonies on the west coast of Asia Minor were founded about 1000 BC and spread to the Black Sea shore. So there were Greek cities and towns in those areas until 1922 of our time. In that year there was one last big war between Greece and Turkey which ended in catastrophe for both countries. But for the Greeks the catastrophe was bigger, because many Greek cities in Asia Minor were destroyed by the Turks. The Greeks of Smyrna (Izmir) were especially hit hard. At the end of that war Greece and Turkey agreed on exchanging their remaining populations, except 100,000 Greeks in Constantinople (Istanbul) and a similar amount of Turks in North-eastern Greece and on some Greek Islands.

Nevertheless Tsifteteli as we know it today, was brought to Greece by the people of Smyrna and at first it was part of the Rembetiko culture. It developed though through the last 80 years, it spread throughout Greece and became established as the most popular and most common Greek dance together with Zeimbekia. The Tsifteteli songs today are quite different from the original Rembetiko Tsifteteli songs. The lyrics are not as sad as the ones of the Rembetiko Tsifteteli. The original Tsifteteli lyrics are very sad, because they reflect the suffering of the people that created them. They mainly talk about poverty, immigration, lost love, desperation, etc. The original Tsifteteli is not a cheerful dance, as many people outside Greece consider it to be.

Posted by mygreekspirit at 10:12 PM No comments: Links to this post

Stavros Flatley at it again lolol - Mazuma Ad in Cyprus

Posted by mygreekspirit at 9:57 PM No comments: Links to this post

The Romani (also Romany, Romanies, Romanis, Roma or Roms; exonym: Gypsies; Romani: Romane or Rromane, depending on the dialect) are an ethnic group living mostly in Europe, who trace their origins to medieval India.

The Romani are widely dispersed with their largest concentrated populations in Europe, especially the Roma of Central and Eastern Europe and Anatolia, followed by the Iberian Kale in Southwestern Europe and Southern France, with more recent diaspora populations in the Americas and, to a lesser extent, in other parts of the world.

Their Romani language is divided into several dialects, which add up to an estimated number of speakers larger than two million.[17] The total number of Romani people is at least twice as large (several times as large according to high estimates), and many Romani are native speakers of the language current in their country of residence, or of mixed languages combining the two. *wikipedia* 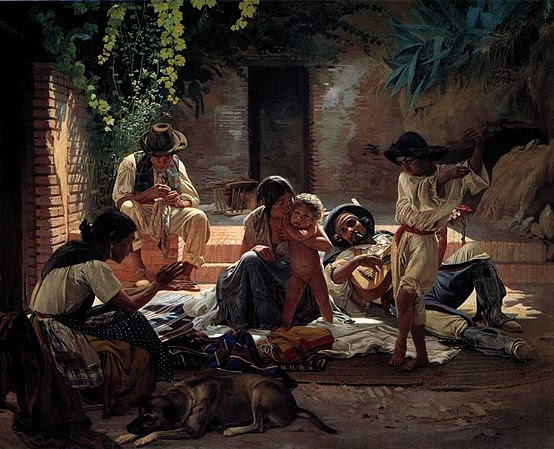 Contemporary scholars have suggested one of the first written references to the Roma, under the term "Atsingani", (derived from the Greek atsinganoi), dates from the Byzantine era during a time of famine in the 9th century.
In the year 800 A.D., Saint Athanasia gave food to "foreigners called the Atsingani" near Thrace. Later, in 803 A.D., Theophanes the Confessor wrote that Emperor Nikephoros I had the help of the "Atsingani" to put down a riot with their "knowledge of magic"."Atsinganoi" was used to refer to itinerant fortune tellers, ventriloquists and wizards who visited the Emperor Constantine IX in the year 1054. The hagiographical text, The Life of St. George the Anchorite, mentions that the "Atsingani" were called on by Constantine to help rid his forests of the wild animals which were killing off his livestock. They are later described as sorcerers and evildoers and accused of trying to poison the Emperor's favorite hound. 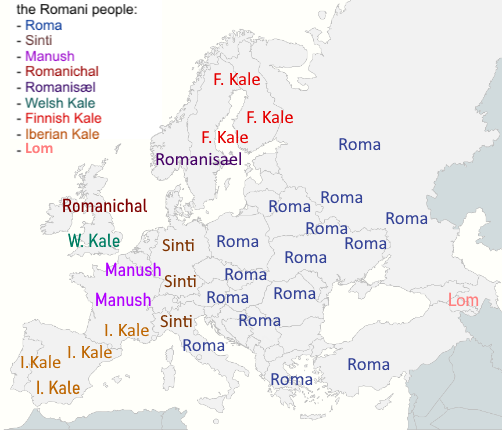 Posted by mygreekspirit at 9:39 PM No comments: Links to this post

The term "karsilamas" comes from the Turkish word "karsilama" meaning "face to face greeting"﻿ and is often used as a slang word designating the pickpocket's method of knocking against someone to steal his wallet. The Greek name of the dance is Antikristos﻿ Makedonikos, meaning "face to face dance from Macedonia."
The dance was popular around Constantinople (now İstanbul, Turkey) during Byzantine times. Originally a warlike dance, the Turks adopted it when they conquered the area.


Posted by mygreekspirit at 9:34 PM No comments: Links to this post

Posted by mygreekspirit at 6:17 PM No comments: Links to this post 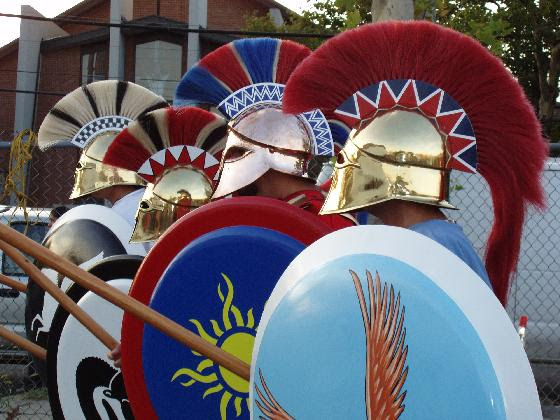 The Greek Warriors is a living history organization based in the New York City area. We represent Ancient Greek warriors in full Greek armor from head to toe. Spears, shields, and Corinthian helmets with tall horse hair crests, are all part of having a living history demonstration performed for you. See ancient Greek warriors live! We are available for the following kinds of events:

Film and Television
Greek Civic and Cultural EventsGreek Festivals - one of our favorite types of eventsAdvertisement
Conventions and Special Events
Posted by mygreekspirit at 12:55 PM No comments: Links to this post 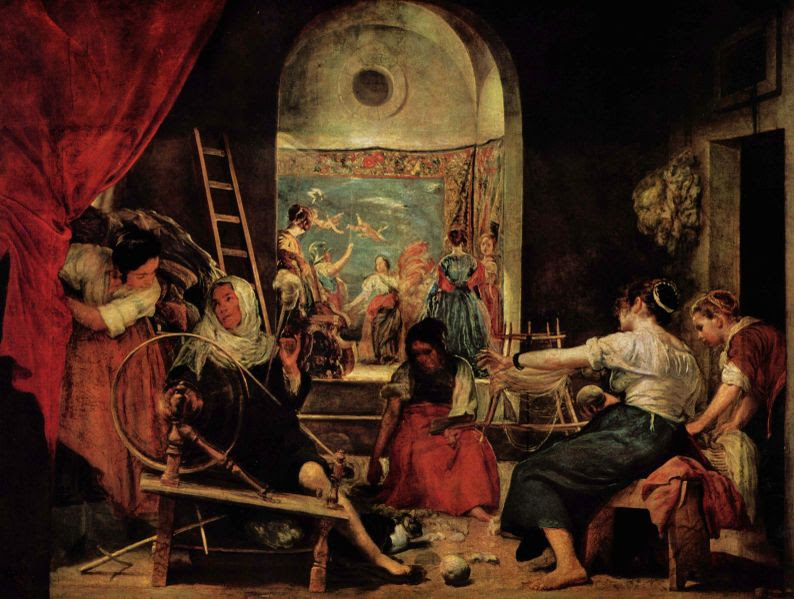 There was a certain maiden of Lydia, Arachne by name, renowned throughout the country for her skill as a weaver. She was as nimble with her fingers as Calypso, that nymph who kept Odysseus for seven years in her enchanted island. She was as untiring as Penelope, the hero's wife, who wove day after day while she watched for his return. Day in and day out, Arachne wove too. The very nymphs would gather about her loom, naiads from the water and dryads from the trees.
"Maiden," they would say, shaking the leaves or the foam from their hair, in wonder, "Pallas Athena must have taught you!"
But this did not please Arachne. She would not acknowledge herself a debtor, even to that goddess who protected all household arts, and by whose grace alone one had any skill in them.
"I learned not of Athena," said she. "If she can weave better, let her come and try."
The nymphs shivered at this, and an aged woman, who was looking on, turned to Arachne.
"Be more heedful of your words, my daughter," said she. "The goddess may pardon you if you ask forgiveness, but do not strive for honours with the immortals."
Arachne broke her thread, and the shuttle stopped humming.
"Keep your counsel," she said. "I fear not Athena; no, nor any one else."
As she frowned at the old woman, she was amazed to see her change suddenly into one tall, majestic, beautiful,—a maiden of grey eyes and golden hair, crowned with a golden helmet. It was Athena herself.
The bystanders shrank in fear and reverence; only Arachne was unawed and held to her foolish boast.
In silence the two began to weave, and the nymphs stole nearer, coaxed by the sound of the shuttles, that seemed to be humming with delight over the two webs,—back and forth like bees.
They gazed on the loom where the goddess stood plying her task, and they saw shapes and images come to bloom out of the wondrous colours, as sunset clouds grow to be living creatures when we watch them. And they saw that the goddess, still merciful, was spinning, as a warning for Arachne, the pictures of her own triumph over reckless gods and mortals.
In one corner of the web she made a story of her conquest over the sea-god Poseidon. For the first king of Athens had promised to dedicate the city to that god who should bestow on it the most useful gift. Poseidon gave the horse. But Athena gave the olive,—means of livelihood,—symbol of peace and prosperity, and the city was called after her name. Again she pictured a vain woman of Troy, who had been turned into a crane for disputing the palm of beauty with a goddess. Other corners of the web held similar images, and the whole shone like a rainbow.
Posted by mygreekspirit at 12:29 PM No comments: Links to this post