Posted by mygreekspirit at 3:00 AM No comments: Links to this post

According to a greek ancient myth, a young woman called Clytia fell in love with Helios, God of the Sun, who unfortunately did not return her sentiments. So intense was her passion that she spent all her time watching him and eventually turned into Helianthus... Sunflower, the flower that is forever turns its face to the sun.

The Wine Route of Dionysus passes through the Region of Eastern Macedonia and Thrace, starting from the area of Serres, where PGI Serres wines are produced. In the city of Serres, visitors can see the Byzantine acropolis and the Folklore Museum of Sarakatsanoi. Also of great interest are the Amphipolis archaeological site and its museum, Alistrati Cave, and for nature lovers - Lake Kerkini.
East of the city of Serres, the Wine Route of Dionysus continues through the vineyards of Drama and Kavala. The PGI Drama, PGI Agora and PGI Ariadne wines are produced in the Drama area. The Aggitis Cave is of great interest, while the Falakro Ski Resort is ideal for winter sports.
South of Drama, the Wine Route of Dionysus continues through the Kavala region, where PGI Kavala and PGI Pageo wines are produced. Starting at the beautiful city of Kavala, where points of interest include the medieval aqueduct, the Kavala Castle, the archaeological museum and the Tobacco Museum, visitors can also see located a short distance away the ancient city and the early Christian city of Philippoi, Anaktaropolis of Nea Peramos and the Tower of Apollonia. Small boats come and go regularly from Keramoti or Peramos to magical Thassos, where the PGI Thassos wines are produced.
#mygreekspirit #Travel #Greece #wine #sunflowers 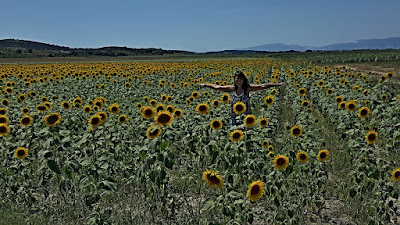 Posted by mygreekspirit at 2:44 PM No comments: Links to this post