Posted by mygreekspirit at 2:56 AM No comments: Links to this post

Posted by mygreekspirit at 2:43 AM No comments: Links to this post

Posted by mygreekspirit at 2:36 AM No comments: Links to this post

Today brings the first of six eclipses in 2011, four solar eclipses and two lunar eclipses. If you think this sounds like a lot of eclipses for one year, you're right. There are only six years in the entire century that hold this many eclipses. Such a phenomenon has, through the ages, made humankind uncomfortable. Have faith that the sun will shine again.

SOLAR ECLIPSE RITUAL: For some, the word "ritual" brings to mind visions of ugly green witches chanting around a fire as they stir up a poisonous brew that will ruin the princess and spice up the fairytale. For me, it's a simple word describing a series of actions that has value beyond the practical implications. For instance, a ritual like drinking coffee in the morning can do more than provide a desired caffeinated response. The actions taken in making the brew, pouring the liquid, dressing up the drink with sweetener or cream, and sipping from the cup from a certain place in the kitchen could be as much of a signal to the body and mind to start the day as the drink itself. A ritual is a symbolic orchestration that sets the mind on a particular intention.
Here's a ritual to acknowledge the energies of the solar eclipse in Capricorn. Go for a walk, especially one that includes a hill. Decide your destination beforehand. Pick up a rock at the beginning of your journey, and set the rock down when you reach your destination. Let nothing stop you from reaching that point. As you complete this goal, consider that other goals in your life could be just as easily accomplished.
Horoscopes by Holiday by Holiday Mathis 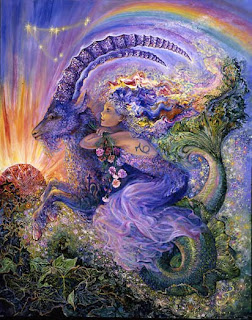 Posted by mygreekspirit at 9:39 PM No comments: Links to this post